What I learnt from a 13-year-old

Ten years and 23 rides later, this ride I do each January continues to offer up unique experiences and unexpected learning opportunities. You’d think that riding the same route but just changing the riders would bring predicable outcomes and begin to become same same.

Hand on heart, leading into the January 2018 rides I was mentally exhausted from a big year, physically in poor condition to ride 1600km and not really looking forward to it at all. The thing that kept me going was the knowledge that I would be spending some time with good friends who I would be riding with for the second or third time and sharing the experience of the first time riders.

I was also dreading the ride into Baan Tharn Namchai as it would be the first time since I started working with Khun Rotjana in 2005 that she would not be there at the end. It was the first ride that would finish not with jubilation and celebration but with an unknown degree of sadness at her absence.

The conversation I was having in my head in the final months and then weeks and days was January would be a ride that I would “just get through”.

But then something happened.

I got onto the bike and started riding. I was back in a place that feels as much like home as any place I know and I was surrounded by a group of remarkable people doing something for someone else with a spirit of giving. I started to shift both mentally and physically as I witnessed what was occurring around me.

Each ride we share the journey with a couple of the kids from the various homes that we support and this year we were joined by Tao on our northern ride. He is 13 years old lives at Baan Home Hug. He lost his mum to AIDS when he was just 12 months old and has never known his father or any relative for that matter, his family is Mae Thiew and the kids of Baan Home Hug. Tao will face medical challenges for the rest of his life as a result of a medical condition he inherited at birth. The cards might have been dealt against him, but he is playing them the best he can.

Tao didn’t so much as ride the 800km from Nong Khai to Home Hug, but with each pedal stroke his strong little legs took he inspired a group of adults who felt privileged to share the journey with this little champion. Never will he understand the way he inspired those from another land, never will he appreciate how often he was spoken about in admiration. He became not just the inspiration for the ride, but none of us will forget too soon the lessons of courage and determination he took us through over those eight days on a bike.

There’s no question we quickly take a lot for granted. We fly here and there at the drop of a hat, we spend often and without need but the ride and what it offers has a way of making you pause, even if its just for a moment.

On the rest day on the northern ride we head out on a river cruise for dinner along the beautiful Mekong River exploring from the top deck of the boat the country of Lao. Taking a quiet moment alone I stood on the side of the deck enjoying the view and next to me was little Tao. I wondered, not for the first time, what he was thinking, what did this experience mean and represent, was he enjoying it? I asked Khun Gae our wonderful tour leader, to ask Tao if he had been on a boat before. A short conversation in Thai confirmed that yes he had been on a boat before, a navy boat. The three of us continued to stand in silence looking out at the lights of another country as the boat slipped down the river. Tao then spoke to Khun Gae who looked at me and said, “but this is the first time he has been on a boat on water”.

Thirteen years old and this was the first time he was on a boat on water.

We live a blessed life and mine is more so for sharing these experiences.

The final four days slipped past in a blur as we rode the country roads of Issan towards Home Hug. On the final day we asked Tao how he was feeling, was he excited to be heading home, “no, he didn’t want the ride to ever finish.”

Of course it did finish and we left the northern ride with our hearts full, our bodies stronger and our minds refreshed.

Then it was onto the southern ride and the ride I was least looking forward to. Dreading the finish.

But again the riding started and the group of return and new riders were in the presence of something special. We were accompanied by Greg Wallace who had taken on the unfathomable challenge of running the 800kms from Petchaburi to Khao Lak over eight days. We saw him some mornings, we passed him each day and some nights, late into the night, we were there to watch him run into the hotel. He was running the exact route that we were riding each day. It was an astonishing challenge he was undertaking and truly appreciated only by those who were there, in the heat and humidity. 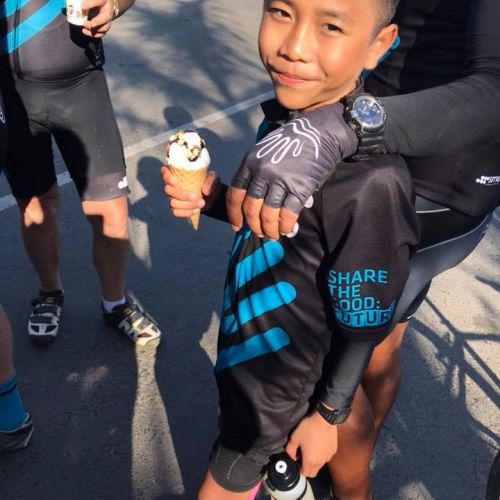 I am not one to set myself a “word” for the year, don’t set out to attach a label to the rides, I just let them unfold and take what they offer.

But the January 2018 rides will forever be for me deeply embedded in my soul. The sight of little Tao riding and his jersey filling with wind turning him into Bruce Banner the Hulk. The sight of Greg coming into the hotel often after nine at night having started running some 15 hours previous, or the incredible group of riders, some riding 1600km over six days, some riding 100km for the first time and all who rode leaving an indelible impression on me.

Starting this Ride Reflection, I thought it was about inspiration, but now as I finish I think it is more about gratitude. The gratitude I have to all those I shared the month of January with. Those who inspired me, those who rode with me, those who let me draft behind you, those that laughed with me or at me, and those who shared the tears (of which there were plenty on the final morning at Khao Sok) I am extremely grateful for what we shared together.

Even after ten years of riding the roads of Thailand amassing some 15,000kms on those roads, 2018 still produced some “firsts” and many learnings. I finish my month of riding, stronger on all levels, go figure by riding 1600kms the mental fatigue from the end of 2017 is gone. My heart is full, despite the absence of Khun Rotjana and my soul has been well and truly fed.

Thank you to the inspiring, the determined, the courageous and beautiful people who rode with me in January 2018.

I think I’ll register on the 1st of February for the 2019 Ride to Provide and do it all again.

Hands Across the Water is dedicated to enriching
the lives of disadvantaged children
and communities in Thailand.